To evaluate the effectiveness of longitudinal long-hole mining in Buriticá vein systems, the Company has completed sublevel development and mined two trial stopes using mobile equipment in the San Antonio vein located at an elevation of 1,547 metres in the central part of the Yaraguá vein system (Figures 1 and 2).

Subsequent channel sampling of the sublevel showed high-grade gold mineralization over substantially broader widths than the modelled 1.2-metre average width of the San Antonio vein domain in the 2015 mineral resource envelope for Yaraguá in this area, a consequence of veinlet sets oblique to the margins of the main vein (Figure 3). Results are as follows:

To accommodate the broader than anticipated high-grade gold mineralization, the east and west stopes were redesigned, resulting in average widths of 2.29 and 2.33 metres, respectively (including 0.3 metres overbreak allowance for each side of the stope). From the 2015 Yaraguá mineral resource model, mill feed from the redesigned stopes was estimated as 1,170 tonnes @ 18.3 g/t gold for the east stope, and 850 tonnes @ 12.6 g/t gold for the west stope.

Approximately 1,300 tonnes of mined material from the east stope and 790 tonnes from the west stope have been delivered to the Yaraguá mill for processing. Importantly, the Company has demonstrated the suitability of long-hole mining for the majority of areas in the Yaraguá and Veta Sur vein systems.

“As we have seen time and time again at Buriticá, vein widths and precious metal grades tend to improve with increased sample density due primarily to unmodelled gold bearing veinlets intersecting master veins at various orientations,” commented Ari Sussman, CEO. “We are presently running material from both mined out stopes through our small-scale processing facility and will report final reconciled results towards the end of Q1 2016.”

“Continental’s first mechanized long-hole trial mining test has provided very valuable experience for our operations and technical teams”, commented Donald Gray, COO. “Not only has dilution proven to be well within expected ranges for these initial trial stopes, but the test mining results we have experienced to date have continued to validate our confidence that the long-hole method will be well suited for Buriticá’s vein systems.”

Certain technical information in this press release is based upon information prepared by Austin Hitchins, P.Geo of JDS Energy & Mining Inc., a Qualified Person (as defined in the Canadian Institute of Mining, Metallurgy and Petroleum Standards on Mineral Resources and Reserves and NI 43 101) and independent of Continental.

Channel samples from the Yaraguá drift averaged approximately 3.51 kilograms mass  (6.83 kilograms maximum and 2.81 kilograms minimum) and were prepared by ALS Colombia Limited and fire-assayed for gold and silver by ALS Perú S.A., as well as being assayed for other metallurgically-significant elements. The Company utilizes a rigorous, industry standard QA/QC program. Blanks, duplicates and certified reference standards are inserted into the sample stream to monitor laboratory performance and a portion of the samples are periodically check assayed at SGS Colombia S.A. in Medellín, Colombia.

For additional information on the Buriticá project, please refer to the technical report, prepared in accordance with NI 43-101, entitled “Independent Technical Report and Resource Estimate on the Buriticá Gold Project 2015” and dated August 7, 2015 with an effective date of May 11, 2015, led by independent consultants Mining Associates Limited. The technical report is available on SEDAR at www.sedar.com, on the OTCQX at www.otcmarkets.com and on the Company website at www.continentalgold.com.

JDS Energy & Mining Inc. is a Vancouver-based mining consulting company with extensive experience in mining and development studies.  JDS has assembled a multi-disciplinary international team of experts to conduct a feasibility study for the Buriticá project.

This press release contains or refers to forward-looking information under Canadian securities legislation, including statements regarding the estimation of mineral resources, advancing the Buriticá project, exploration results, potential mineralization, potential development of mine openings, potential improvement of mining dilution grades, future drill programs and studies, future channel sampling results, completion of a feasibility study, exploration and mine development plans, and future plans and objectives of the Company, and is based on current expectations that involve a number of significant business risks and uncertainties. Forward-looking statements are subject to other factors that could cause actual results to differ materially from expected results. Readers should not place undue reliance on forward-looking statements. Factors that could cause actual results to differ materially from any forward-looking statement include, but are not limited to, an inability to advance the Buriticá project to the next level, failure to convert estimated mineral resources to reserves, capital and operating costs varying significantly from estimates, the preliminary nature of metallurgical test results, delays in obtaining or failures to obtain required governmental, environmental or other project approvals, political risks, uncertainties relating to the availability and costs of financing needed in the future, changes in equity markets, inflation, changes in exchange rates, fluctuations in commodity prices, delays in the development of projects and the other risks involved in the mineral exploration and development industry. Specific reference is made to the most recent Annual Information Form on file with Canadian provincial securities regulatory authorities for a discussion of some of the factors underlying forward-looking statements. All of the forward-looking statements made in this press release are qualified by these cautionary statements, and are made as of the date hereof. The Company assumes no responsibility to update them or revise them to reflect new events or circumstances other than as required by law.

Figure 1 – Plan View of the location of both trial stopes showing the surface projection of veins in the current Yaraguá and Veta Sur mineral resource models on geology–topography and underground developments. 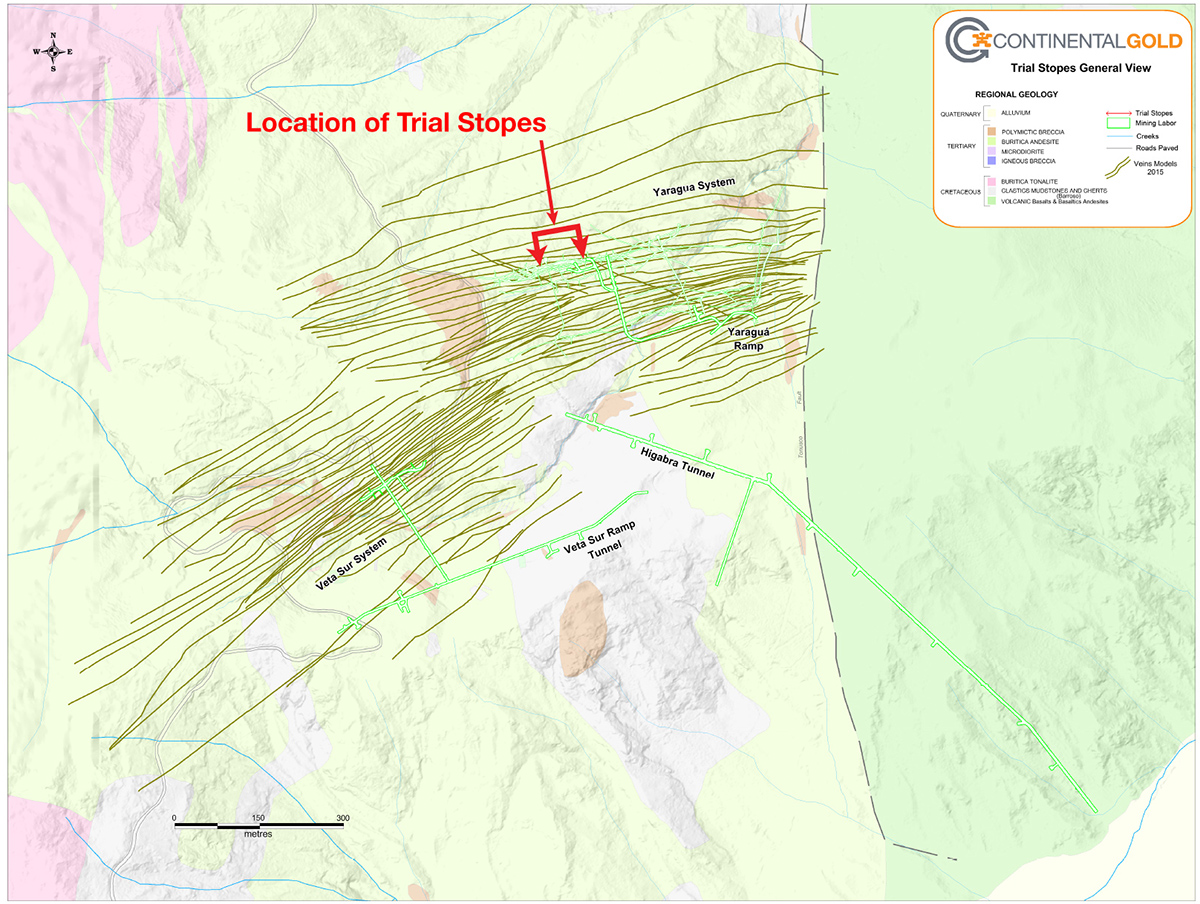 Figure 2 – Long section (at elevation of 1,550 metres) and sectional views of the completed East and West stopes and lower access drift. 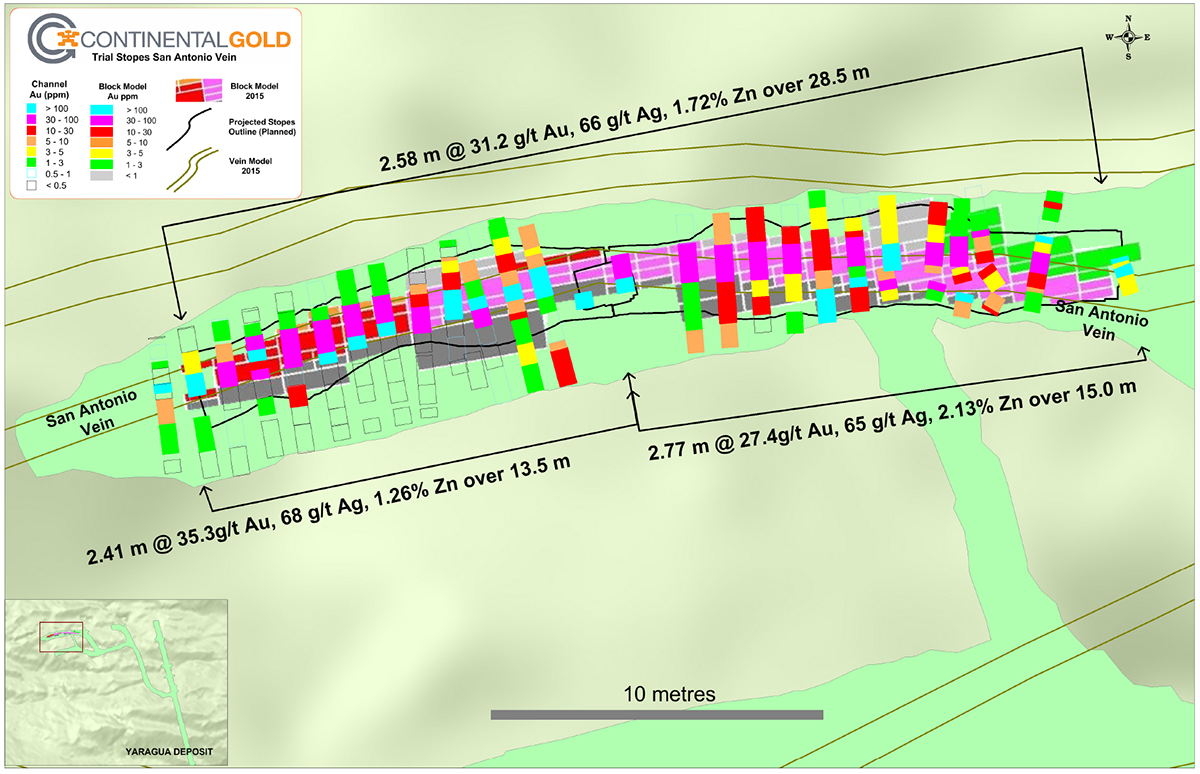