Toronto, Sept. 9, 2019, – Continental Gold Inc. (TSX:CNL; OTCQX:CGOOF) (“Continental” or the “Company”) is pleased to announce high-grade channel sampling assay results from seven development drifts being prepared as part of the underground construction at its 100%-owned Buriticá project in Antioquia, Colombia. Development of the Buriticá project remains on schedule with first gold pour anticipated in H1 2020. Supporting information for results discussed in this release can be found in Figures 1-6 and all sampling widths reported herein are at true horizontal metres.

“The project continues to advance on schedule with anticipated first gold pour fast approaching in H1 2020. High grades of both gold and silver are being observed both visually and through channel sampling assay results in the vast majority of drifts on mineralized structures in both vein systems and at all elevations. Importantly, the Company just completed blasting and connecting a ventilation raise bore in the Veta Sur system. With better underground ventilation now available at the elevation where the future mill will be located, development will accelerate more rapidly along high-grade mineralized structures,” commented Ari Sussman, CEO.

Located in the central-western part of the Yaraguá system at an elevation of 1,175 metres, very high-grade gold has been encountered along a mineralized corridor in the western portion of a development drift, with results as follows (Figure 1):

Underground drift development is continuing at present to extend mineralization to the both the east and west along the drift.

High-grade gold over robust strike lengths has been channel sampled along six different development drifts in the Veta Sur system. The drifts range 430 vertical metres of elevations from 1,610 metres (near the upper part of the Veta Sur system) to 1,180 metres (at the Higabra Valley elevation where the mill is currently being built).
Assay results from channel sampling for a drift in the western portion of the Veta Sur system has yielded a new area of mineralization (Figure 2). High-grade gold, which was encountered in the southern drift on this section, remains open for expansion along strike to the southwest, with results as follows:

A new drift, currently being developed along a mineralized structure in the northeastern portion of the Veta Sur system, has encountered continuous high-grade gold through channel sampling over a significant strike length (Figure 3). The high-grade mineralization encountered in the drift remains open to the southwest, with development continuing to advance. Assay results from this new drift are as follows:

Another new drift, located at the eastern-most portion of the Veta Sur system, is being developed in both the east and west along strike of a mineralized structure (Figure 4). To date, assay results have begun to outline an exciting high-grade zone with mineralization remaining open along strike to the east and west, with results as follows:

Two parallel drifts, which are located in the southcentral portion of the Veta Sur system at an elevation of 1,180 metres, have outlined high-grade gold over robust drift lengths in two separate mineralized structures. Mineralization remains open along strike to the southwest in both development drifts, with results as follows:

Additional development drifts at various elevations are currently being advanced for both the Yaraguá and Veta Sur systems; once channel sampling assay results are received and evaluated, they will be released in a timely manner.

For reference, the mineral reserve estimate for the Buriticá project (as at February 24, 2016) is as follows:

Figure 1: Underground Channel Sampling Results from the Central-Western Portion of the Yaraguá System at 1,175 RL 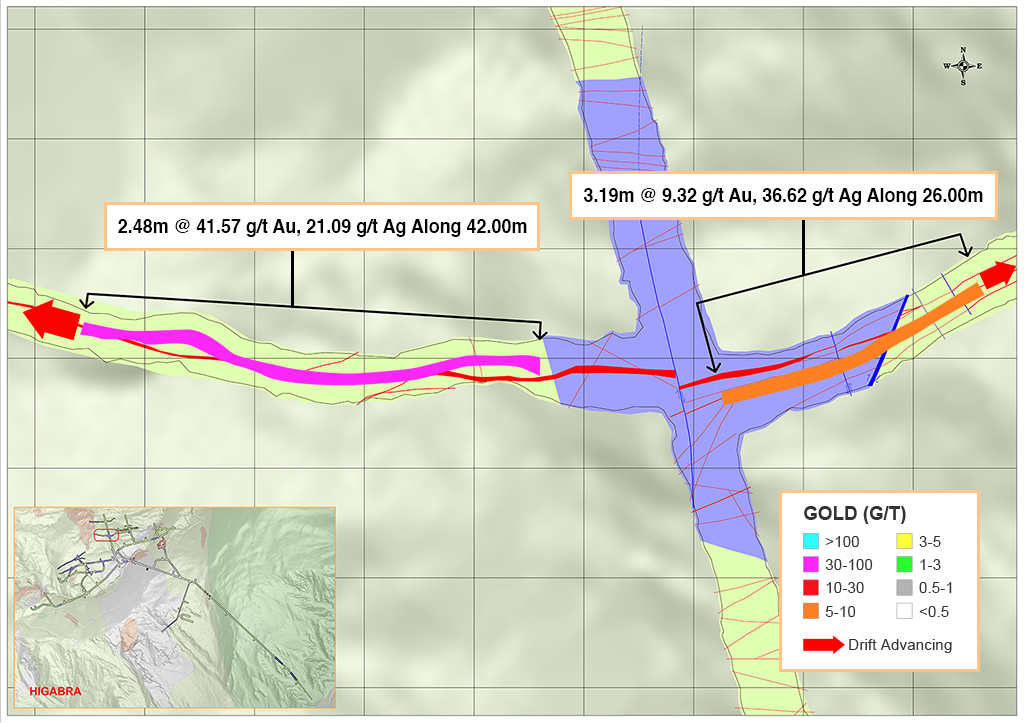 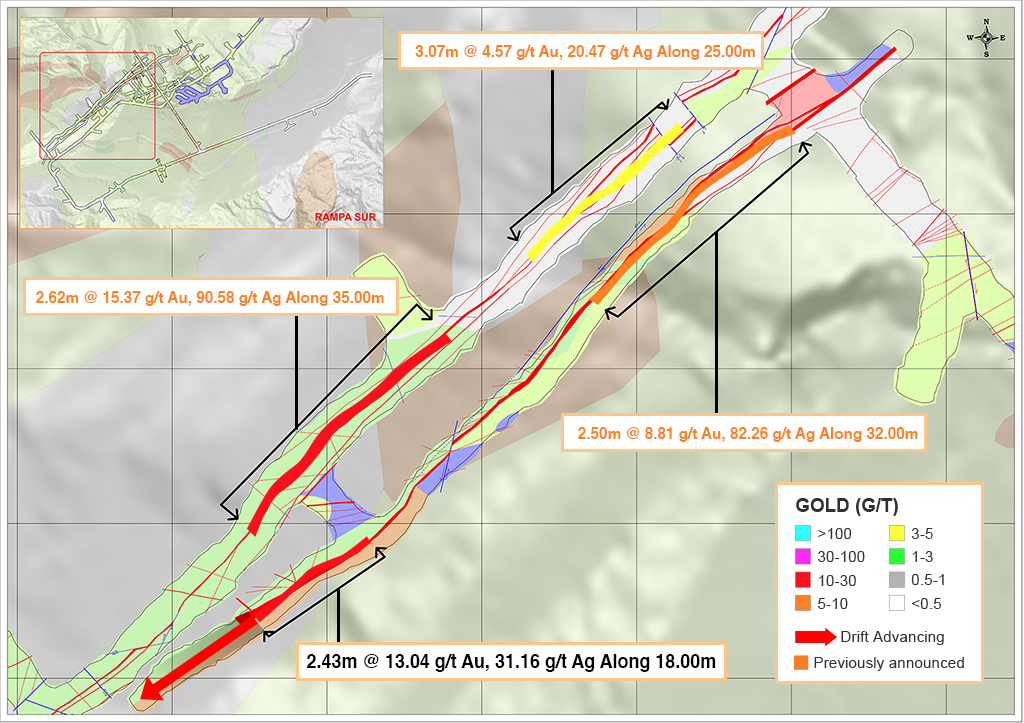 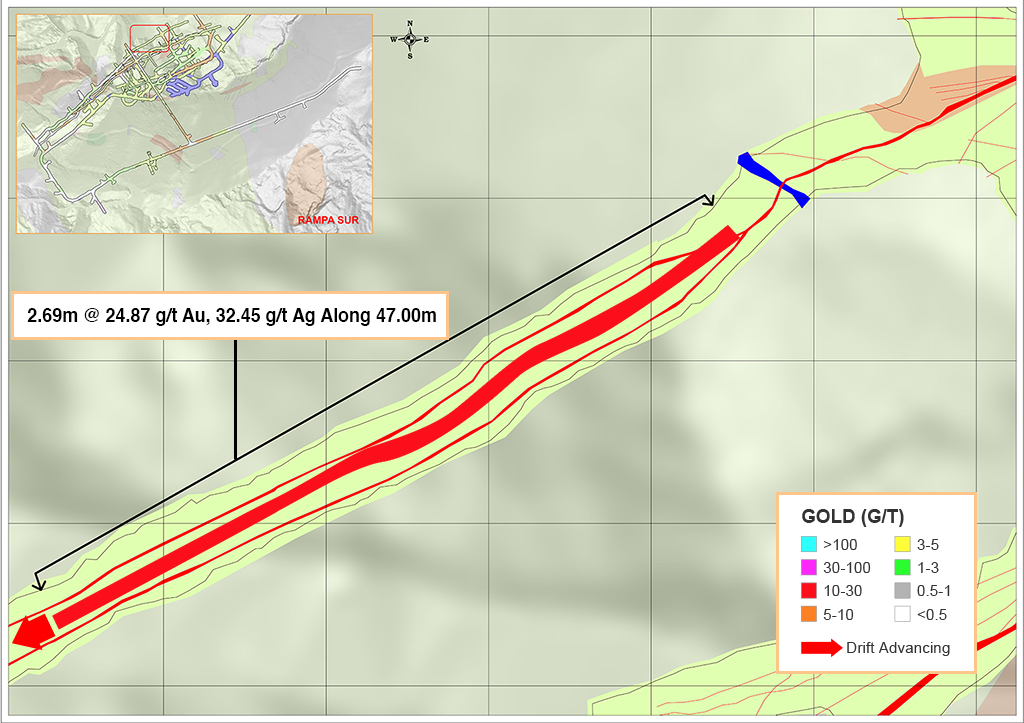 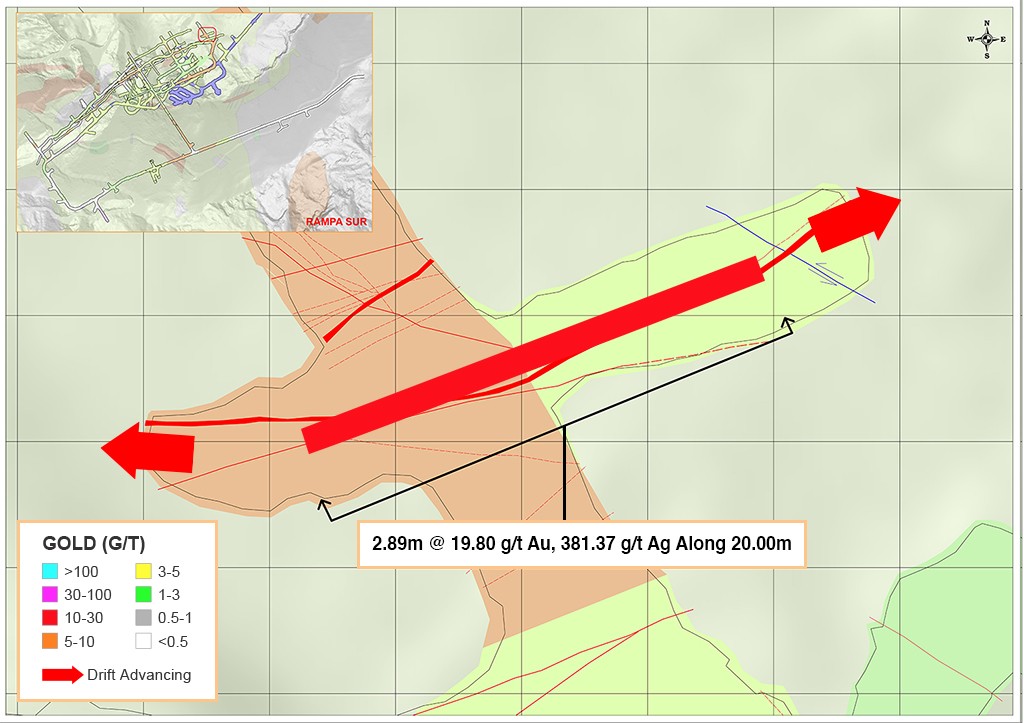 Figure 5: Underground Channel Sampling Results from the South-Central Portion of the Veta Sur System at 1,180 RL 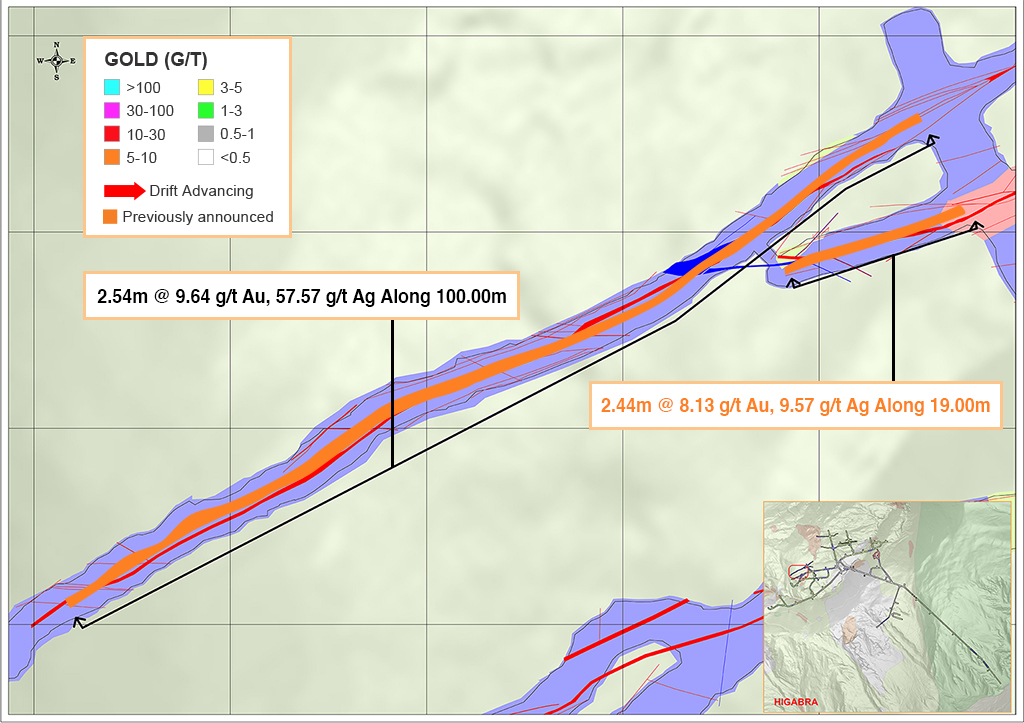 Figure 6: Underground Channel Sampling Results from the South-Central Portion of the Veta Sur System at 1,180 RL 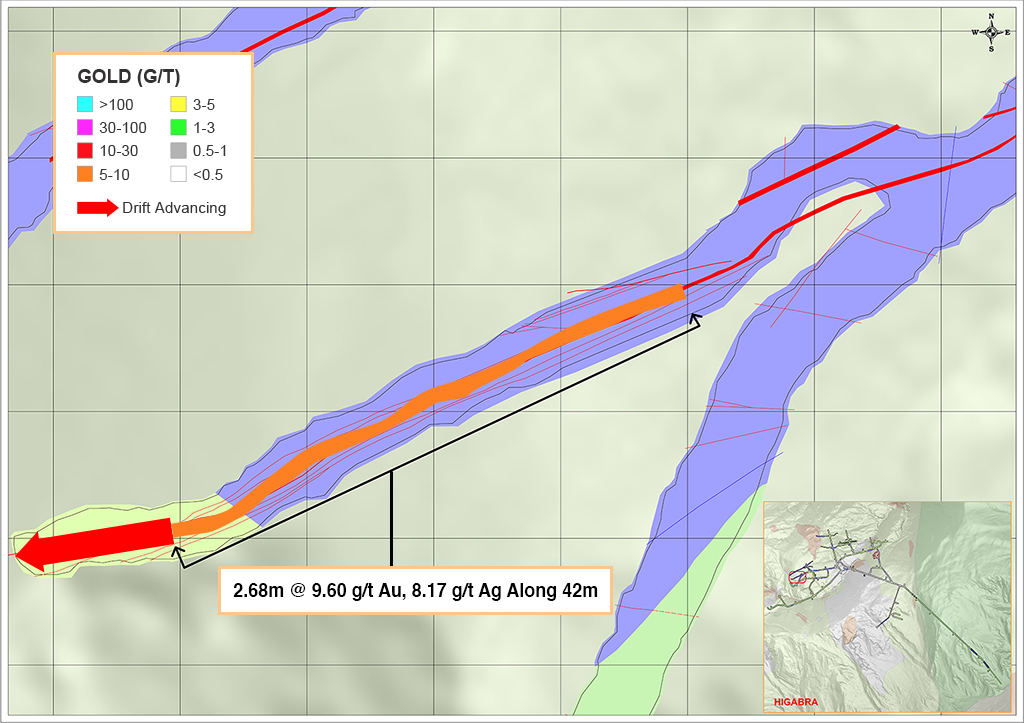 Geological Description of the Buriticá Project

Donald Gray, Chief Operating Officer and a Qualified Person for the purpose of Canadian National Instrument 43‑101 (“NI 43‑101”), has prepared or supervised the preparation of, or approved, as applicable, the technical information contained in this release.

Channel samples are taken continuously along the walls of the underground crosscut and across the face of the underground drift. Faces are nominally spaced every 2 to 3 metres along the drift, and face composites average six length-weighted channel samples. Averaged mineralized widths shown in the tabulations and figures for selected intervals along strike are true horizontal metres at a 2.0 g/t Au cut-off and a 2.4 m minimum width. The minimum width is chosen to match the expected stope minimum width, thus the intervals include some of expected planned edge and internal mining dilution. No capping has been applied to sample composites. The Company utilizes a rigorous, industry-standard QA/QC program.

Rock samples have been prepared and analyzed at Continental Gold’s Yaraguá mine laboratory at Buriticá, Colombia. Blanks, duplicates and certified reference standards are inserted into the sample stream to monitor laboratory performance. Crush rejects and pulps are kept and stored in a secured storage facility for future assay verification. Although historic correlation between analytical results from the Company’s internal laboratory and certified independent laboratories for gold and silver analysis have been within acceptable limits, the Company’s internal laboratory is not independent or certified under NI 43‑101 and, as such, results in this release should only be taken by the reader as indicative of future potential.

For information on the Buriticá project, please refer to the technical report, prepared in accordance with NI 43‑101, entitled “NI 43‐101 Buriticá Mineral Resource 2019‐01, Antioquia, Colombia” and dated March 18, 2019 with an effective date of January 30, 2019, led by independent consultants Ivor Jones Pty Ltd. The technical report is available on SEDAR at www.sedar.com, on the OTCQX at www.otcmarkets.com and on the Company website at www.continentalgold.com.

Forward-Looking Statements
This press release contains or refers to forward-looking information under Canadian securities legislation—including statements regarding: timing of drill results, first gold pour and commercial production; advancing the Buriticá project; exploration results; potential mineralization; potential development of mine openings; potential improvement of mining dilution grades; reducing start-up risks; and exploration and mine development plans—and is based on current expectations that involve a number of significant business risks and uncertainties. Forward-looking statements are subject to other factors that could cause actual results to differ materially from expected results. Readers should not place undue reliance on forward-looking statements. Factors that could cause actual results to differ materially from any forward-looking statement include, but are not limited to, an inability to advance the Buriticá project to the next level, failure to convert estimated mineral resources to reserves, capital and operating costs varying significantly from estimates, the preliminary nature of metallurgical test results, delays in obtaining or failures to obtain required governmental, environmental or other project approvals, political risks, uncertainties relating to the availability and costs of financing needed in the future, changes in equity markets, inflation, changes in exchange rates, fluctuations in commodity prices, delays in the development of projects and the other risks involved in the mineral exploration and development industry. Specific reference is made to the most recent Annual Information Form on file with Canadian provincial securities regulatory authorities for a discussion of some of the factors underlying forward-looking statements. All the forward-looking statements made in this press release are qualified by these cautionary statements and are made as of the date hereof. The Company assumes no responsibility to update them or revise them to reflect new events or circumstances other than as required by law.