Toronto, Ontario, February 21, 2019 – Continental Gold Inc. (TSX:CNL; OTCQX:CGOOF) (“Continental” or the “Company”) is pleased to announce additional high-grade assay results from six holes drilled into the Yaraguá vein system as part of the exploration drilling program at its 100%-owned Buriticá project in Antioquia, Colombia. The Company is currently operating six underground definition drill rigs and one exploration drilling rig. As previously announced, the Company plans to drill up to 73,500 metres in 2019, consisting of approximately 55,000 metres of capitalized definition drilling and approximately 18,500 metres of exploration-led infill drilling. Supporting information for results discussed in this release can be found in Table 1 and Figures 1 and 2.

“The discovery of BMZ3 is an important milestone for the Buriticá Project as it delivers another potential bulk mineable zone to our mine-planning group ahead of anticipated first gold pour in H1 2020,” said Ari Sussman, CEO. “With the construction of the Buriticá mine continuing on schedule at a brisk pace, excitement and momentum are growing rapidly with our employees and the Buriticá community.”

The Company also anticipates receiving additional assay results shortly for recently completed drill-holes into the BMZ2 discovery announced on January 15, 2019. Results will be reported once they are compiled and interpreted.

* Intercepts calculated for minimum intervals of 0.5 metres.
** Grades herein are reported as uncapped values. Gold equivalent in this release and table was calculated at Au:Ag ratio of 1:75 with no assumptions made for metallurgical recovery rates.

Figure 1 – Plan View of Drilling in the Yaraguá System 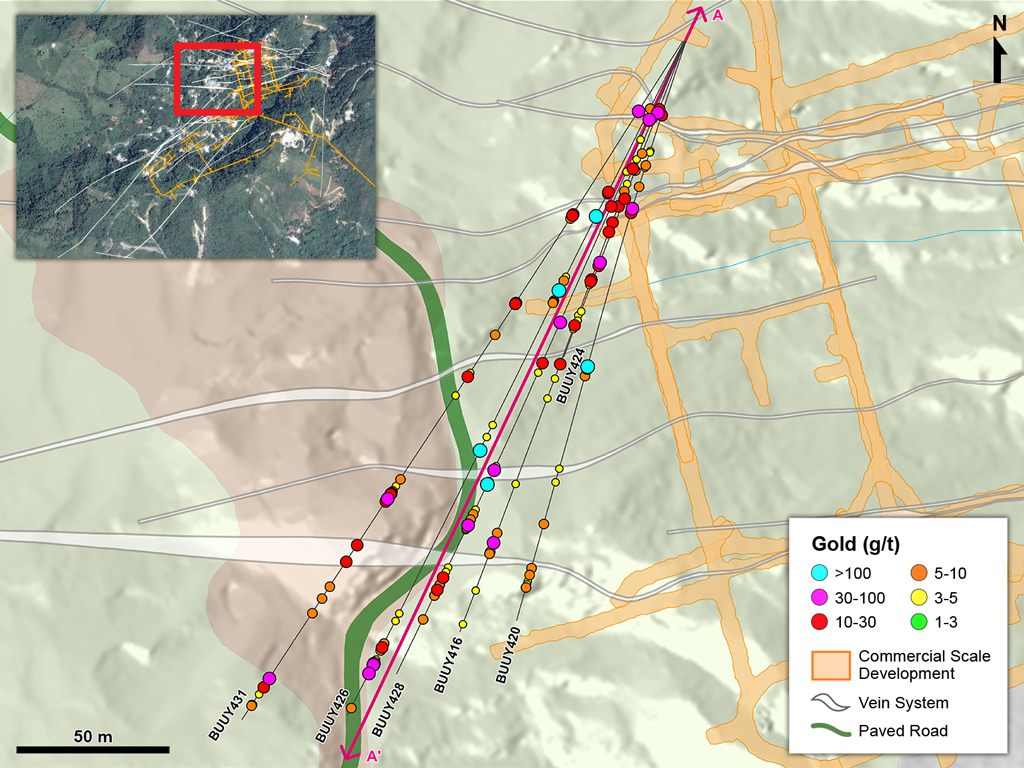 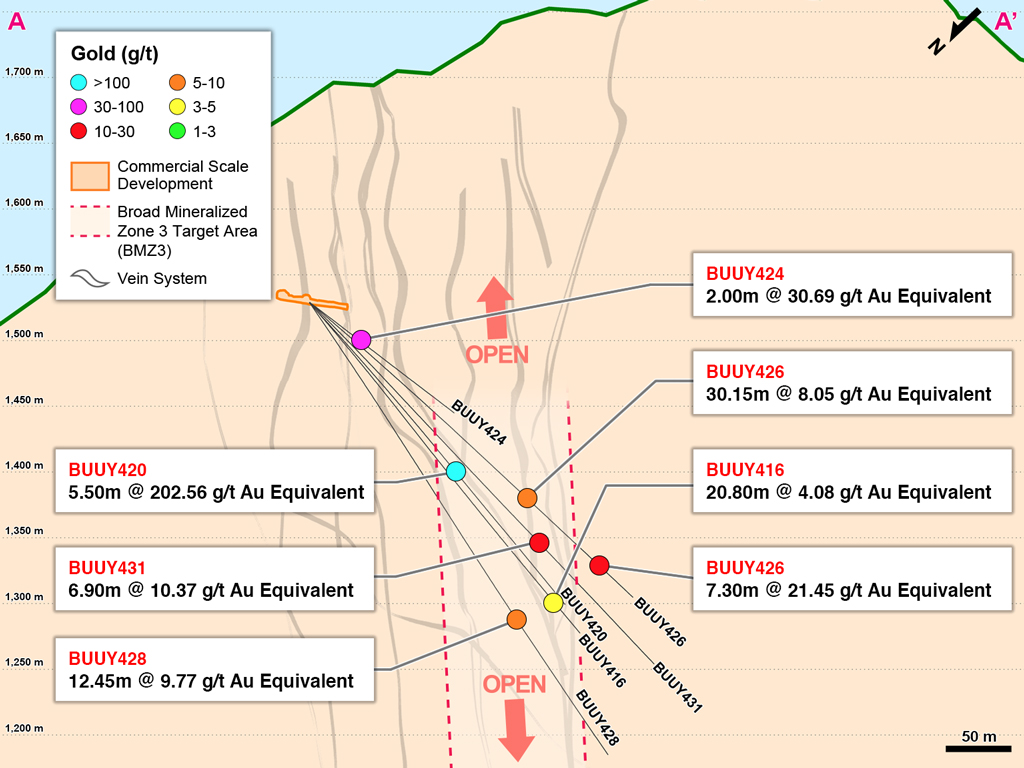 BMZ3 Details
BMZ3 consists of a group of modelled precious metal-bearing vein domains that interlope within an intrusive breccia with pervasive hydrothermal alteration (quartz, sericite and pyrite), resulting in a fracturally controlled zone of mineralization. As a result, bulk mineralization is pervasive in this zone albeit at somewhat lower grades than the individual modeled veins presenting potential for more productive mineable zones. To date, the Company has identified up to seven BMZ targets for testing and will systematically drill each target zone as underground mine development advances.

Technical Information
Mauricio Castañeda, Vice-President, Exploration of the Company and a Qualified Person for the purpose of Canadian National Instrument 43 101 (“NI 43 101”), has prepared or supervised the preparation of, or approved, as applicable, the technical information contained in this press release.

Reported intervals include minimum weighted averages of 3 g/t gold equivalent (1:75 Au/Ag) over core lengths of at least 1.0 metres. Assays are uncut except where indicated.

The Company does not necessarily receive assay results for drill holes in sequential order; however, all significant assay results are publicly reported.

For information on the Buriticá project, please refer to the technical report, prepared in accordance with NI 43 101, entitled “Buriticá Project NI 43–101 Technical Report Feasibility Study, Antioquia, Colombia” and dated March 29, 2016 with an effective date of February 24, 2016, led by independent consultants JDS Energy & Mining Inc. Additional information on the Company’s updated mineral resource estimate for the Buriticá project, with an effective date of January 26, 2019 and prepared by the Company under the guidance and supervision of Mr. Ivor W.O. Jones, M.Sc., FAusIMM, CPgeo, P.Geo (an independent Qualified person under NI 43-101 guidelines), is available in the Company release dated January 30, 2019. The technical report and Company release are available on SEDAR at www.sedar.com, on the OTCQX at www.otcmarkets.com and on the Company website at www.continentalgold.com.

Forward-Looking Statements
This press release contains or refers to forward-looking information under Canadian securities legislation—including statements regarding: timing of drill results and first gold pour; advancing the Buriticá project; exploration results; potential mineralization; potential development of mine openings; potential improvement of mining dilution grades; reducing start-up risks; and exploration and mine development plans—and is based on current expectations that involve a number of significant business risks and uncertainties. Forward-looking statements are subject to other factors that could cause actual results to differ materially from expected results. Readers should not place undue reliance on forward-looking statements. Factors that could cause actual results to differ materially from any forward-looking statement include, but are not limited to, an inability to advance the Buriticá project to the next level, failure to convert estimated mineral resources to reserves, capital and operating costs varying significantly from estimates, the preliminary nature of metallurgical test results, delays in obtaining or failures to obtain required governmental, environmental or other project approvals, political risks, uncertainties relating to the availability and costs of financing needed in the future, changes in equity markets, inflation, changes in exchange rates, fluctuations in commodity prices, delays in the development of projects and the other risks involved in the mineral exploration and development industry. Specific reference is made to the most recent Annual Information Form on file with Canadian provincial securities regulatory authorities for a discussion of some of the factors underlying forward-looking statements. All the forward-looking statements made in this press release are qualified by these cautionary statements and are made as of the date hereof. The Company assumes no responsibility to update them or revise them to reflect new events or circumstances other than as required by law.