Continental Gold Discovers BMZ2 With Drill Intercepts of High-Grade Gold Over Broad Intervals in the Yaraguá System at the Buriticá Project, Colombia

TORONTO, Jan. 15, 2019 /CNW/ – Continental Gold Inc. (TSX:CNL; OTCQX:CGOOF) (“Continental” or the “Company”) is pleased to announce additional high-grade assay results from underground channel sampling and nine holes drilled into the Yaraguá system as part of the underground mine construction and exploration drilling program at its 100%-owned Buriticá project in Antioquia, Colombia. The Company plans to drill up to 73,500 metres in 2019, consisting of approximately 55,000 metres of capitalized definition drilling and approximately 18,500 metres of infill drilling. Additionally, the Company has a significant backlog of drill holes being assayed, and the results are pending and will be reported in due course. Lastly, an updated NI 43-101 mineral resource estimate for the Buriticá project remains on schedule and is expected to be completed prior to the end of Q1 2019.

Ari Sussman, Chief Executive Officer of the Company, stated: “Yesterday, the Company received numerous queries of concern from our shareholders questioning whether our largest shareholder, Newmont Mining, would remain engaged with Continental Gold after its merger with Goldcorp. Newmont has unequivocally confirmed that it ‘remains supportive of Continental and the continued development of the Buriticá project.”

“Additionally, I would like to personally congratulate our geology and mine development teams for working together in discovering BMZ2. While it may be very early days in assessing this new discovery, we are excited nonetheless as it offers similar tonnage and grade potential to BMZ1, which has already been drill-traced over 400 metres vertically and remains open at depth. Being able to potentially mine two broad, high-grade and large tonnage zones, alongside high-grade yet narrow individual veins, will only serve to enhance the mine and increase operations flexibility. On the basis of the discovery of BMZ2, our mine development team has begun drift towards the zone and anticipates reaching it in April 2019.”

Based on reinterpretation of the geological model using recently updated lithological and block models as well as assay data from previous drilling, a location for the BMZ2 target was generated. Seven new diamond drill holes covering approximately 100 vertical metres were designed to test the target, resulting in a new discovery. Key results are as follows:

These intercepts into the BMZ2 new discovery not only confirm its presence, but also that it hosts high-grade gold over robust widths. While it is still early days towards understanding the potential of this new discovery, the Company is optimistic that additional drilling may result in a zone, which is similar to BMZ1 further to the west, that covers 440 vertical metres and remains open for depth expansion. If proven by future drilling, BMZ2 could introduce additional mine plan flexibility and greatly increase production flexibility for future mining.

Based on core inspection and subsequent refinement of the model, the Company believes that BMZ2 extends further south than where the drilling tested. As a result, three subsequent holes (BUSY397, BUSY398 and BUSY399) were completed into what is interpreted to be the central part of the zone; assay results for these drill holes are pending and will be reported on in due course.

In addition to the discovery of BMZ2, all nine diamond drill holes successfully intercepted high-grade gold-bearing veins at various elevations covering more than 580 metres. All vein intercepts resulted in significantly higher grades than in the current mineral resource block model and remain open for expansion at depth and along strike to the east towards the projection of the Tonusco fault and at depth. Key results are as follows:

The results from the HW vein are significantly higher grades with wider exposures than the mineral resource estimate block model as follows:

(1) Represents difference between block model and the true horizontal width of the crosscut on a grams x metre basis
(2) Channel chip samples are taken along the walls of the underground crosscuts and across the face of the underground drifts with vein exposures.

* Intercepts calculated for minimum intervals of 0.5 metres.
** Grades herein are reported as uncapped values. Gold equivalent in this release and table was calculated at Au:Ag ratio of 75:1 with no assumptions made for metallurgical recovery rates.

With a continued objective of strengthening security for the organization, the Company is pleased to announce that Captain Jairo Ivan Ariza has been appointed as Vice-President, Protection. This new position within the organization will report directly to Luis German Meneses, Country Manager, and will be in charge of all security-related strategies and initiatives for the Company.

Captain Ariza has enjoyed a diverse career in both the public and private sectors. He spent 17 years (1985-2012) in the National Navy of Colombia, culminating with the rank of Captain and being a member of the Joint Naval Staff of the Navy Command. From 2013-2016, Captain Ariza worked for the National Government of Colombia within the Ministry of Defense, where he was involved in creating security-related policies and strategies to combat criminality in Colombia. Finally, from 2016 until joining Continental, he was the Director of Risk Control for AngloGold Ashanti, where he was responsible for all security and protection-related matters. Captain Ariza holds Master’s degrees in Business Administration, Political Science and Marketing and Management. 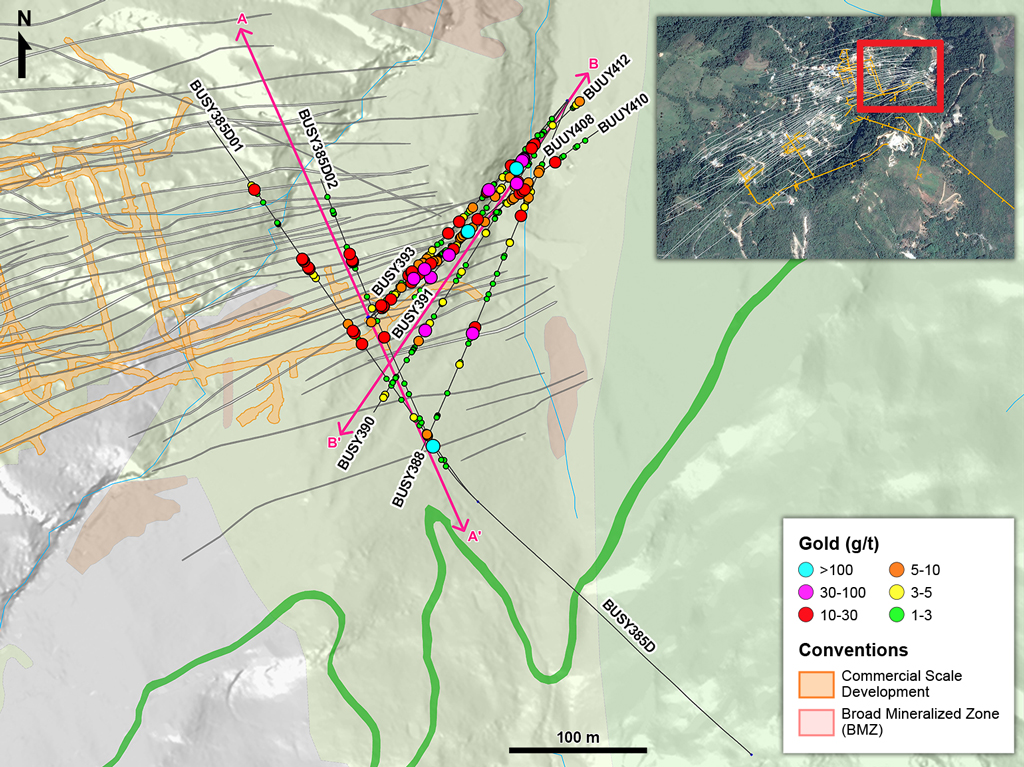 Figure 3 –Cross Section B- B’ of New BMZ2 Discovery 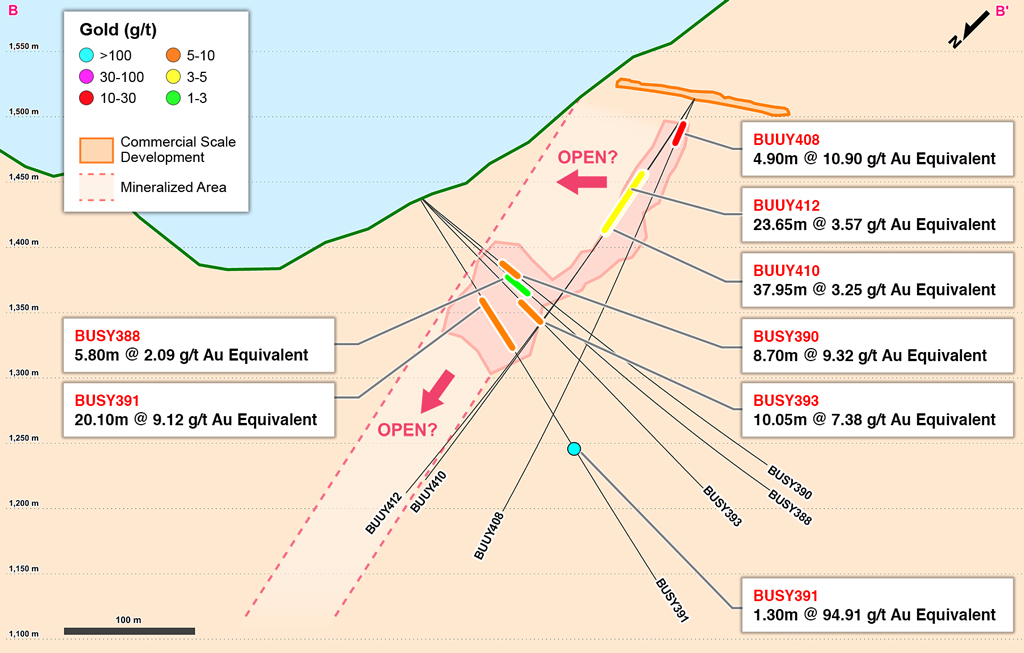 *BMZ2 is a three-dimensional orebody interpretation and modelling with variability in width, thickness along a vertical extension. Additional core drilling is been planned to define its characteristics such as gold/silver grades, geometry and vertical extension. 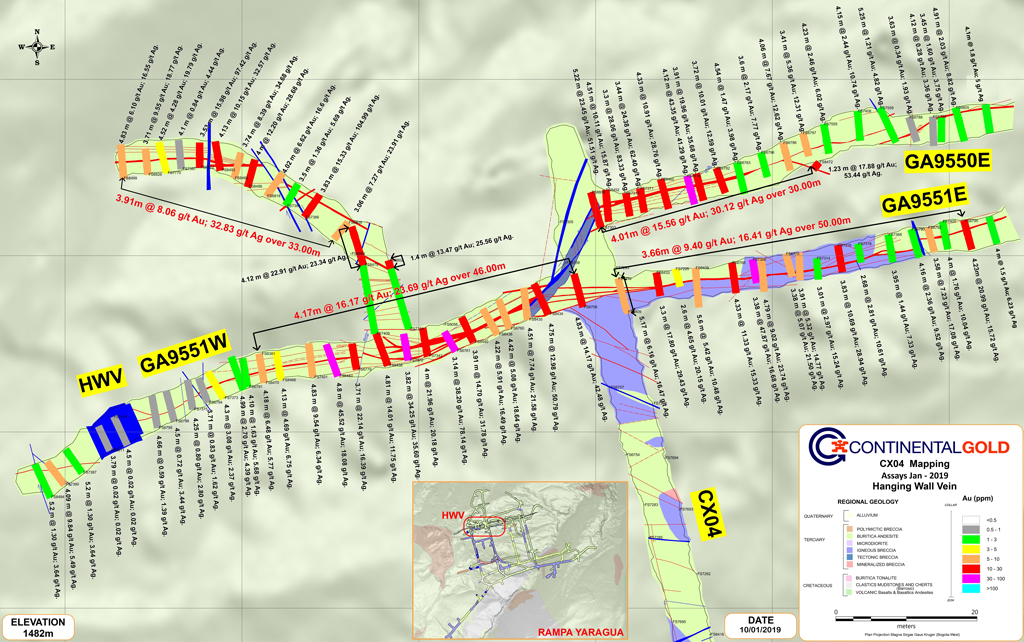 BMZ Details
The BMZ consists of a group of modelled precious metal-bearing veins in the current mineral resource estimate block model with mineralization occurring between these veins, generally in the form of veinlets at oblique angles to strike. The majority of the mineralization between modelled veins is not in the current mineral resource estimate, providing potential upside both in terms of identifying significantly broader and more productive zones for mining and increased mineral resources. To date, the Company has identified up to seven BMZ targets for testing and will systematically drill each target zone as underground mine development advances.

For information on the Buriticá project, please refer to the technical report, prepared in accordance with NI 43‑101, entitled “Buriticá Project NI 43–101 Technical Report Feasibility Study, Antioquia, Colombia” and dated March 29, 2016 with an effective date of February 24, 2016, led by independent consultants JDS Energy & Mining Inc. The technical report is available on SEDAR at www.sedar.com, on the OTCQX at www.otcmarkets.com and on the Company website at www.continentalgold.com.