Toronto, Ontario, March 1, 2019 – Continental Gold Inc. (TSX:CNL; OTCQX:CGOOF) (“Continental” or the “Company”) is pleased to announce additional high-grade assay results from 10 holes drilled into the Yaraguá system as part of the exploration drilling program at its 100%-owned Buriticá project in Antioquia, Colombia. The Company plans to drill up to 73,500 metres in 2019, consisting of approximately 55,000 metres of capitalized definition drilling and approximately 18,500 metres of exploration-led infill drilling. Supporting information for results discussed in this release can be found in Table 1 and Figures 1 and 2.

“With only 15 drill holes completed to date into our newly-discovered BMZ2, we are off to an exciting start in outlining this new zone. Due to BMZ2 demonstrating excellent continuity and high grades over robust thicknesses, the Company has prioritized both exploration and definition drilling for the zone on the belief that BMZ2 will ultimately be integrated into the early years of mining for the Project,” stated Ari Sussman, CEO.

Ten diamond drill holes were completed in the eastern area of the Yaraguá system, of which seven drill holes targeted BMZ2. Unfortunately, two holes (BUSY394 and BUSY396) were completed prior to receiving assay results leading to the January 15, 2019 announcement of the discovery of BMZ2 and consequently were drilled too far north to intercept the zone. The five holes that intercepted BMZ2 all successfully encountered high-grade gold over robust thicknesses and extended the dimensions of the zone to 100 metres along strike by 225 metres vertically. BMZ2 remains open along strike to the east and at depth for future expansion. Two diamond drill rigs are now turning and assay results will be reported in due course.

Two diamond drill holes (BUSY385D03 and BUSY385D04) tested a section of the current mineral resource model approximately 200 metres below the elevation of the Higabra Tunnel which intersected gold mineralization, including a best intersection of 6.10 metres @ 7.78 g/t gold and 5.8 g/t silver (BUSY385D04).

* Intercepts calculated for minimum intervals of 0.5 metres.
** Grades herein are reported as uncapped values. Gold equivalent in this release and table was calculated at Au:Ag ratio of 75:1 with no assumptions made for metallurgical recovery rates.
*** True widths intercepted modelled veins outside of the BMZs are estimated to be between 75-100%. In the BMZs, however, the zone consists of veins at various orientations so individual drill holes will intercept certain veins within the zone at up to true orthogonal angles and others at up to oblique angles. 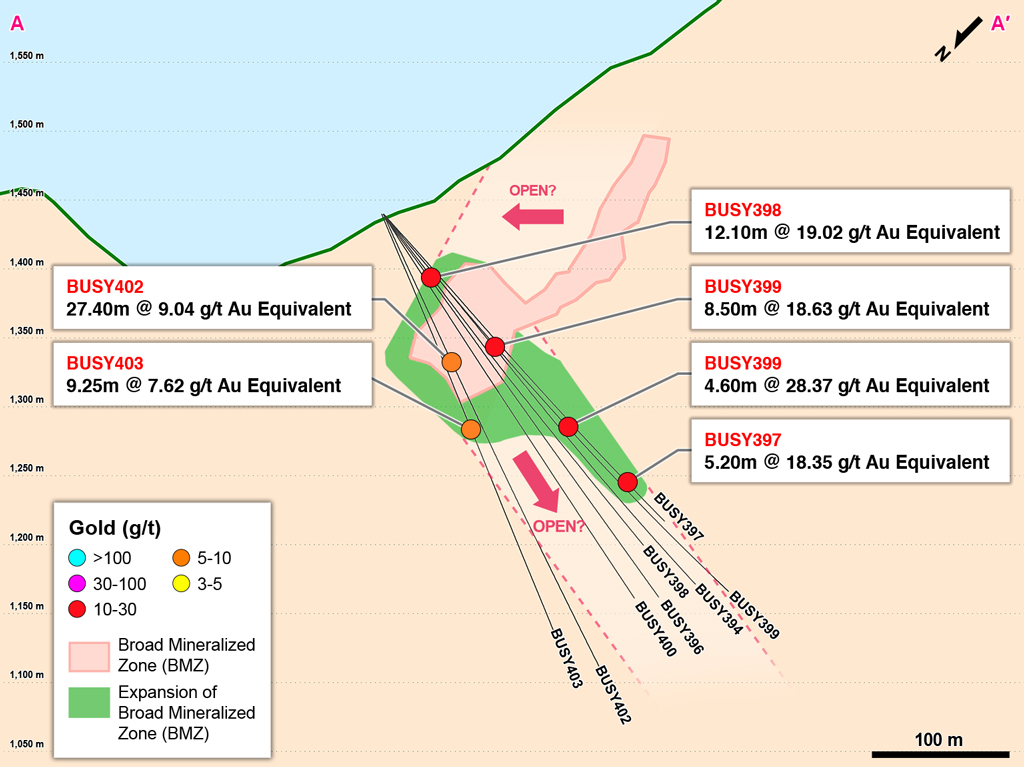 BMZ Details
The BMZ consists of a group of modelled precious metal-bearing veins in the current mineral resource estimate block model with mineralization occurring between these veins, generally in the form of veinlets at oblique angles to strike. The majority of the mineralization between modelled veins is not in the current mineral resource estimate, providing potential upside both in terms of identifying significantly broader and more productive zones for mining and increased mineral resources. To date, the Company has identified up to seven BMZ targets for testing and will systematically drill each target zone as underground mine development advances.

BMZ2 is a three-dimensional orebody interpretation and modelling with variability in width, thickness along a vertical extension. Additional core drilling is been planned to define its characteristics, such as gold/silver grades, geometry and vertical extension.

Technical Information
Mauricio Castañeda, Vice-President, Exploration of the Company and a Qualified Person for the purpose of Canadian National Instrument 43 101 (“NI 43 101”), has prepared or supervised the preparation of, or approved, as applicable, the technical information contained in this press release.

Reported intervals include minimum weighted averages of 3 g/t gold equivalent (1:75 Au/Ag) over core lengths of at least 1.0 metres. Assays are uncut except where indicated.

The Company does not necessarily receive assay results for drill holes in sequential order; however, all significant assay results are publicly reported.

For information on the Buriticá project, please refer to the technical report, prepared in accordance with NI 43 101, entitled “Buriticá Project NI 43–101 Technical Report Feasibility Study, Antioquia, Colombia” and dated March 29, 2016 with an effective date of February 24, 2016, led by independent consultants JDS Energy & Mining Inc. Additional information on the Company’s updated mineral resource estimate for the Buriticá project, with an effective date of January 26, 2019 and prepared by the Company under the guidance and supervision of Mr. Ivor W.O. Jones, M.Sc., FAusIMM, CPgeo, P.Geo (an independent Qualified person under NI 43-101 guidelines), is available in the Company release dated January 30, 2019. The technical report and Company release are available on SEDAR at www.sedar.com, on the OTCQX at www.otcmarkets.com and on the Company website at www.continentalgold.com.

Forward-Looking Statements
This press release contains or refers to forward-looking information under Canadian securities legislation—including statements regarding: timing of drill results and first gold pour; advancing the Buriticá project; exploration results; potential mineralization; potential development of mine openings; potential improvement of mining dilution grades; reducing start-up risks; and exploration and mine development plans—and is based on current expectations that involve a number of significant business risks and uncertainties. Forward-looking statements are subject to other factors that could cause actual results to differ materially from expected results. Readers should not place undue reliance on forward-looking statements. Factors that could cause actual results to differ materially from any forward-looking statement include, but are not limited to, an inability to advance the Buriticá project to the next level, failure to convert estimated mineral resources to reserves, capital and operating costs varying significantly from estimates, the preliminary nature of metallurgical test results, delays in obtaining or failures to obtain required governmental, environmental or other project approvals, political risks, uncertainties relating to the availability and costs of financing needed in the future, changes in equity markets, inflation, changes in exchange rates, fluctuations in commodity prices, delays in the development of projects and the other risks involved in the mineral exploration and development industry. Specific reference is made to the most recent Annual Information Form on file with Canadian provincial securities regulatory authorities for a discussion of some of the factors underlying forward-looking statements. All the forward-looking statements made in this press release are qualified by these cautionary statements and are made as of the date hereof. The Company assumes no responsibility to update them or revise them to reflect new events or circumstances other than as required by law.